A Tale of Two Demographies: Employment Outcomes and Gender Differentials in India, 2017-18 to 2018-19

The recently released Periodic Labour Force Survey (PLFS) 2018-19 data covering the time period between July 2018 and June 2019 presents a landscape that has considerably altered with the onset of the COVID19 pandemic. Analyzing the same is still useful however, given that it provides us a snapshot of what the labour market looked like just before the pandemic struck and allows us to anticipate the pandemic’s differential impact on the working population.

The controversy between the comparability of PLFS and the erstwhile Employment Unemployment Surveys (EUS) surveys notwithstanding (Kant, 2019; Mohanan and Kar, 2019), while the 2017-18 PLFS recorded an unemployment rate (UR) of 6.1 percent, the highest the Indian economy had faced in the last 45 years, the 2018-19 survey records a relative reduction in unemployment, 5.8 percent in 2018-19 (Table 1). Between 2018-19 and 2017-18, unemployment rates have fallen for all categories save for urban males for whom it has remained unchanged (Table 1). As has already been noted, there has been an increase in both the labour force participation rates (LFPR) and worker participation ratio (WPR) for all employment categories except that of urban males. [1] A significant change is seen with respect to rural females, whose WPR has risen by 1.5 percentage points during the past one year. This is interesting given that the trend since 2004-05 onwards has been that of a fall in the WPR across all demographic categories. (Nath et al. 2019)

The reduction in unemployment and rising work force participation of women, however, must be approached with caution. As shall be outlined in this note, there is a divergence of outcomes for men and women. While men see an increase in regular employment in urban areas, women experience an expansion of self-employment with falling real incomes, especially rural women hailing from the poorest households.

Employment generation but with differential outcomes

We apply the WPR ratios obtained from the PLFS surveys on the population figures provided by the government to arrive at broad estimates of total employment generated.[2] [3] We find that during the aforementioned period the workforce grew by a little more than 13 million persons (Table 2), an increase in the workforce that is roughly equal to the number of jobs lost between 2011-12 and 2017-18. [4] [5]

These increases are largely seen in the categories of urban men and rural women. 6.9 million rural women and 5.3 million urban men joined the workforce during this period. The rise of the former is interesting, given that the story of the employment loss witnessed between 2011-12 to 2017-18 was one of rural women leaving the workforce (Kannan and Raveendran, 2019). From figure 1, we note that the rise in rural female workforce numbers has been down to women moving away from domestic activities and entering the workforce as active participants. This phenomenon has taken place across age groups, save for the 25-29 year age group where the reverse is observed.

A majority of this employment rise is due to an increase in the number of urban men engaged in regular salaried work (31%) followed by female own account workers (OAWs) based in the rural sector (27%) (Figure 2). Unpaid females (rural) and regular salaried females (urban) have also contributed to the overall employment gain. In absolute terms, 4.03 million jobs were created for urban regular salaried men between 2017-18 and 2018-19 (Table 2) while there was a corresponding rise of 3.57 million rural female OAWs. 1.96 million unpaid female helpers also entered the rural workforce during this time, while roughly the same number of unpaid males had left the rural labour market during this time 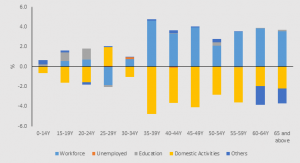 Figure 2. Contribution to Employment Gain (in %) by Activity status (UPSS)

The employment gain narrative of regular salaried men in urban areas is primarily a service sector driven story with 77 percent of the 4 million odd jobs created having taken place here (Figure 3). The major avenue of this employment generation has been in retail trade (6.3 lakh new jobs) followed by financial (4.3 lakhs) and health services (4.1 lakhs) (Figure 4).

Rural OAWs constituted more than half of all female employment created in the rural labour market. Much of this 3.6 million rise in female OAWs (rural) was driven by employment creation taking place in the agricultural sector followed by jobs created in manufacturing activities. (Figure 3) In the rural labour market, 11.7 lakh women entered into animal production, around 5.3 lakh women started working as self-employed workers in textile production while another 4.9 lakh engaged themselves in non-perennial crop production. 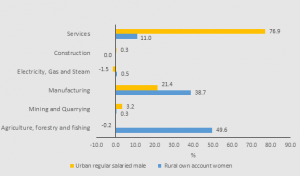 Though there was an increase in regular wage employment for urban men, they did not enjoy significant wage gains; their real wage earnings grew by around 2 percent for the year. (Table 3b) The biggest income growth for men was seen for OAWs in the urban areas. The situation for female OAWs, on the other hand, is worrying. Their earnings decreased over this period, for both rural and urban areas. The biggest gains were seen for female employers, though only a miniscule fraction of the rural female workforce finds employment here. The real earnings of rural female OAWs in agriculture witnessed a very significant decline of almost 4.5 percent (Table 4) Given that much of the increase in female self-employment is seen in rural agricultural OAWs, a large section of the rural female workforce was thus affected by falling real incomes. Secondly, even though secondary sector real incomes were rising, the level of these incomes was extremely low.

An argument could be made to say that even though real incomes are falling, it would imply an improvement in welfare for those women who were earlier engaged in domestic work but are now in paid work. This may be true, but we would disagree that such a situation implies an unambiguous increase in welfare. While first-time workers may see an increase in incomes, real incomes would fall for those women who have always been working in these sectors, indicating that they would have to work longer and harder to maintain a given standard of living. Falling average real incomes, while representing a rise in aggregate income for first-time workers, might indicate the prevalence of “distress employment”, where workers engage in poorly paid activities in order to supplement falling levels of household consumption. Such a situation was seen during the period 1999-2000 to 2004-05, where employment growth rose significantly in the presence of widespread agrarian distress. As Abraham (2009) wrote, this could signal a situation where the non-working population enters the labour market to ameliorate a situation of profound economic insecurity. Whatever be the factors leading to increased labour market participation of rural women, the fact that the average levels of real incomes have been falling does not bode well for an economy and its workforce.

The 2018-19 PLFS reveals a worrying picture of polarisation in employment outcomes. Men find employment in urban regular wage jobs, while women largely find work in rural self-employment. This expansion of women’s employment is not an unambiguously positive development. A large share of it is in unpaid work and self-employment, with self-employment earnings falling over the period in real terms. Moreover, the primary sector sees an increase in female OAWs from poorer households, who experience the burden of falling real incomes.

The results of the PLFS provide a view on how deeply the current pandemic, lockdowns, and the reverse flow of migrant workers might severely change work and gender dynamics in the Indian economy. With a large number of male migrants leaving jobs in the cities and returning to rural areas, there is the possibility that rural women move back into domestic duties, as men take up agricultural jobs. Moreover, given that the expansion of employment in agriculture saw a reduction in real earnings even before the pandemic, one can expect whatever rural employment to emerge from the pandemic to be of reduced real earnings. The rural economy requires a massive expansion of public works and fiscal assistance to tide over the deadly pandemic that is still running rampant in our economy.

[7] Real values were derived by deflating nominal values – wages for casual and regularly employed workers and self-reported earnings for the self—employed – by the CPI-2012 values for rural and urban sectors.

[9] Each cell shows the change for each employment status and household consumption category as a share of the change in the total labour force of rural women from 2017-18 to 2018-19.

[10] Each cell shows the change in each sector and household consumption category as a share of the change in the total labour force of rural women from 2017-18 to 2018-19.

Himanshu. (2019, August 1). Opinion: The seriousness of the problem of unemployment in India. Retrieved from https://www.livemint.com/opinion/columns/opinion-the-seriousness-of-the-problem-of-unemployment-in-india-1564679281965.html