On the misclassification of employment status data in the ILOSTAT Database

“In this piece we highlight a methodological problem with the ILOSTAT data on “Employment by status in employment​” which gives the proportions of workers engaged in self-employment and wage employment across countries. These cross-country data appear to have mis-categorised casual wage workers as self-employed workers in the Indian case.”

In this piece we highlight a methodological problem with the ILOSTAT data on “Employment by status in employment​” which gives the proportions of workers engaged in self-employment and wage employment across countries. These cross-country data appear to have mis-categorised casual wage workers as self-employed workers in the Indian case. Thus ILOSTAT data for this indicator do not always match the employment status definitions recommended by the International Classification of Status in Employment (ICSE-93), even though the ILO website reports that it uses ICSE-93 definitions. Further, different types of classification seem to be employed for different countries, making comparative work difficult. While ILOSTAT is a rich and important resource for such work, the data need to be used with caution given the issues that we highlight.

The issue first caught our attention when we observed an interesting pattern in the World Development Indicators (WDI) employment data, which is based on ILOSTAT. In a cross-country scatter plot showing the share of employment in agriculture as a function of per capita GDP, India appears close to the trendline (Figure 1).

Figure 1: Share of agricultural employment versus GDP per capita across developing countries, 2018 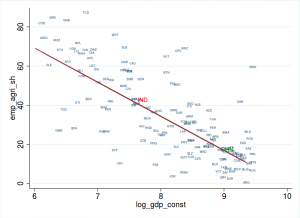 But, a similar analysis for share of self-employment (own-account workers, employers, and unpaid helpers) in the workforce, shows India to be a significant outlier (Figure 2).

Figure 2: Share of self-employment versus GDP per capita across developing countries, 2018 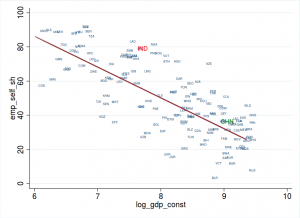 At first glance, this suggests that while the share of agricultural employment in India is as expected given its level of per capita income, the country has a much greater than expected proportion of self-employed workers. This seems to be an important aspect of the structure of India’s economy worthy of further consideration. However, on closer examination, we think this may be an artefact of misclassification of data in ILOSTAT.

To understand this issue, first, we briefly outline the categorization of status in employment recommended by ICSE-93, which is meant to form the basis of data reported by ILOSTAT. Next, we highlight that the ILOSTAT indicator does not follow the ICSE-93 system for India, even though the available data allows one to follow the categorisation. Then we briefly compare the classification of data for India and Mexico in ILOSTAT to indicate that the classification system that ILOSTAT follows is not consistent across countries.  While the ICSE-93 classification is followed for Mexico, a different logic that does not match  ICSE-93 is followed for India. Finally, we provide a brief reasoning for why ILO may be taking this route for different methods of data classification across different countries. However, we  argue that such reasoning may not be adequate and recommend a reconciliation of ICSE-93 definitions and ILOSTAT data on employment status.

According to ICSE-93, activity status may be  classified into five main categories: (a) employers; (b) own-account workers; (c) contributing family workers; (d) members of producers’ cooperatives; (e) employees. While the first four categories [(a)-(d)] are classified as self-employment, (e) is classified as paid employment. In defining these two categories, the webpage clearly states that

“Employees are those workers who hold the type of jobs defined as “paid employment jobs”, where the incumbents hold explicit (written or oral) or implicit employment contracts that give them a basic remuneration that is not directly dependent upon the revenue of the unit for which they work.”

Misclassification of data for India

According to the labour force surveys for India (based on which ILO models its statistics), the share of self employed and the share of employees among all employed persons in 2011-12 was around 50 percent each (as reported in the NSSO Employment-Unemployment Survey, 2011-12). This category of self-employed can be further subdivided into own-account workers (33 percent), employers (1.5 percent), and unpaid workers (15 percent). Similarly, the category of employees can also be subdivided into casual and regular employees, with their share among the total employed being 30 percent and 19 percent, respectively.

However, the ILO Modelled statistics from ILOSTAT show that for India in 2012, the percentage of own-account workers is 62 percent, employers is 1.5 percent, unpaid workers is 15 percent, and employees is 19 percent. Thus it seems clear that for India, ILOSTAT sums the numbers for own account workers (33 percent) and casual wage employees (30) into one category called “own-account workers”. Such a merging of statistics across self-employment and paid employment categories is incorrect and contradicts the definitions that the ICSE-93 specifies. Further given that Indian employment surveys allow for a classification according to the ICLS categories it is not the case that this aggregation was due to the lack of data on these distinct categories. While we report the 2012 numbers here, the problem persists for all years reported in the ILOSTAT data for India, including the latest available data, for 2018.

Thus the divergence shown above between Figures 1 and 2, is an artefact of this misclassification. If, instead, the NSSO data on share of self-employment were used in Figure 2, India would, in fact, be close to the trendline.

Further, this categorisation is not uniform across countries. For example, in the case of Mexico the categorisation does correspond to ICSE-93. Since the ILOSTAT website does not mention the different classifications that it uses to categorize data for different countries, it is difficult to say why a uniform method is not being followed. Additionally, the micro data repository based on which these results are calculated is not publically available, thereby making it difficult to re-classify data correctly.

We end with one possible explanation for this type of classification, where own account workers are merged with casual wage workers. The ILO website mentions that “a high proportion of wage and salaried workers in a country typically signifies advanced economic development”, whereas a high proportion of own-account workers (self-employed without hired employees) “may be an indication of a large agriculture sector and low growth in the formal economy”. Finally, a high proportion of unpaid workers (contributing family workers) signifies “poor development, little job growth, widespread poverty and often a large rural economy”. In this classification, the unpaid workers and own account workers “are summed to create a classification of ‘vulnerable employment’, while wage and salaried workers together with employers constitute ‘non-vulnerable employment’”.

Since casual wage employment does not fall under formal contractual arrangements (due to absence / lack of social security and written job contracts) and is ‘vulnerable’ in nature, it is possible that this reasoning is being used to clubbed such workers with own-account workers. However, such a classification blurs the distinction between wage employment and self-employment that is essential to understand the basic employment structure of an economy.

Since  the ILOSTAT database is a rich repository for cross-country empirical work we hope that this issue can be resolved soon. Further, it would be useful if the method of classification for each country, if distinct, is clearly outlined so that researchers are aware of such differences and the reasons for them. Finally, access to the micro-data repository based on which the ILO constructs these statistics would be extremely useful in case re-classification becomes necessary.